The death of Carrie Fisher and Debbie Reynolds

As 2016 nearly was at its end who would have predicted that Carrie Fisher and Debbie Reynolds would both die. Carrie was the first to pass on and then within less than 2 days her mother followed apparently broken hearted.

With all these deaths occurring late in 2016 I decided to take a look at their two charts and it was amazing what I saw. There were so many similarities there and ways in which they interlocked with one another’s designs. So let’s take a look

So taking a look at the Human Design bodygraph for Carrie Fisher below what can we see? 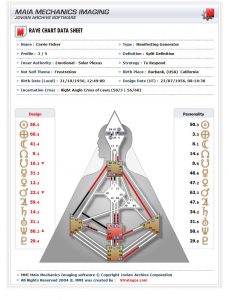 A quick look at her chart shows she is a Manifesting Generator so she wants it all and she wants it NOW! Always on the go, always busy and often found relaxing by doing something different, rather than sitting down. Being a Manifesting Generator she had a strategy of waiting to respond. Although from what we saw a lot of the time she ignored this and carried on striving for things. This could only end up one way and that was in a state of frustration and if pushed hard enough anger would follow.

She was  a split definition so needed to meet people twice, hear things twice etc. As there were two sides of her that needed different things and behaved differently. This could lead to internal conflict with the two separate factions neither understanding each other nor agreeing with one another.

She had a 3/5 profile which is the martyr/heretic. The 3 is the martyr that would often be doing things out of habit well beyond when they really wanted to be doing them. The 3 also often indicates an addictive tendency in someone. Whether it is to work, sex, alcohol, drugs or a whole host of other things. The 3 needs to remember that laughter and fun is the key for them. Rather than getting more and more angry and cross they need to lighten up and laugh a little more.

The 5 is the heretic, the person who can be outspoken and say things as they are. This can end up making people feel uncomfortable but it does shake things up and gets people thinking outside the box. The 5 is also all about illusion and delusion too so forgiveness is the key that opens the life to the 5

Where am I going?

Carrie Fisher has an undefined G or self centre and this normally leads to a person not knowing what they want to be when they grow up. They lack a sense of direction and this can be especially tricky when you were a Manifesting Generator. She also had an undefined Heart centre which in this system is the home of the ego. So in a way she was ego-less which could have held her back as she watched others implement her ideas.

In the root centre

With a defined root centre she will be able to take on large projects and break them down into smaller more manageable chunks. However it does mean that if she chooses to put herself under pressure there is no getting away from it.

Having an undefined mind she would have needed to watch who was around her and get clear on her decisions etc when alone. Otherwise enter a person with a defined mind into her aura and she could quickly loose clarity and start concerning herself about she thought, they thought, she ought to do or say. So for her, time away from everyone was important to her.

And now for some differences

So we have seen a few of the things that are the same in both designs. Now taking a look at some differences. Firstly it is apparent that Debbie had a defined G or self centre so was very clear on where she was going in life. She on the other hand may not know how to get there. With the undefined centre Carrie had no clear idea of where she was going but could if not careful take on her mothers aspirations. An undefined centre not only reflects the energy of the defined centre but magnifies it first. You will also see this pattern repeated in the heart centre which is the home of the ego. So with a defined heart centre Debbie could tend to over power her daughter and take over all too easily.

I see also that Debbie Reynolds also has the complete channel connecting the root centre to the sacral. This 42/53 channel means that Debbie can start things and complete them too, Thus seeing everything she starts all the way through where as Carrie Fisher has neither of these gates . This could have resulted in things tending to get started and completed by Carrie when her mother was with her.

Debbie also has a undefined spleen which does make her very sensitive. This might be to people, food, environment etc.  She is the type that likes to be a catalyst for others but if they do not pick up their end of the deal she may suggest they go elsewhere. Whereas Carrie can tend to be more like a nurse volunteering to do everything for everyone, The defined spleen can also tend to miss subtle clues about health until they become sizeable.

So when Carrie Fisher and Debbie Reynolds got together all the centres get filled in or defined. This means that there is little room for anyone else to get in and can lead to people making light conversation and moving on. However, and here is a challenge, the higher and lower mind get defined and are still cut off from the rest of the design. So the mental pressure could have built up between the two and needed to be let out. They can do this by going somewhere public where someone in the area would have made the connection for them and allowed them to communicate. Of course the pressure will build again and this would need to be repeated.

Would like your own version of a Carrie Fisher and Debbie Reynolds reading ?

Remember if you would like your own reading doing or perhaps a relationship reading, a family reading or even a business partnership treading fill in your details here and receive your free chart