We wake on Boxing day to learn of the sudden and unexpected death of singer George Michael at the age of 53. What a year this has been with so many being taken and often too young. So what can we learn about this man from his Human Design? 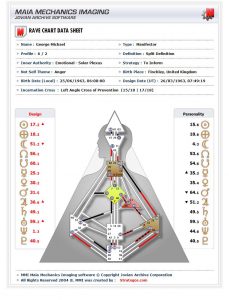 George Michael was a Manifestor

Well George certainly did manage to Manifest quite a lot in his 53 short years on the earth. Always seemingly fast to respond to request from fellow musicians to get involved with musical projects. With the manifestor type they always should inform others who are likely to be affected by their actions. If they fail to do this great feelings of anger can arise. Just reminding them of their strategy they have failed to follow. So in his life there were such moments of anger from George which played out often in public view. Especially after the press had got hold of it.

George was a 6/2 which in Human Design terms equates to the profile of the role model hermit. This is something he shares with Michael Jackson who was also a 6/2 profile. The 6 is that of the role model not a perfect person but someone who is here to lead by example and when he does get things wrong to not try to hide it but to keep working on perfecting things. Te 2 is the Hermit and this is where George needs time and space alone doing his own thing. If he does not get this he may well have found it hard to relax and settle down.

So taking time out alone would no doubt be good for gaining inspiration for the words of a new song or the music to go along with them. In fact by simply taking his space when he needed it he was being the perfect role model. Of course the press love to get hold of stories like this and as they did with Michael Jackson hound the person and start calling them reclusive. O f course Michael came out with his response to all that in his record “Leave me alone” a message to the press to do just that.

George had a split definition in  his design so it would be like two people living inside the one body. They would often not understand one another and could easily disagree too. This might also make George feel like he was a little slow in getting things but he just had a need to hear things twice. And not just the same things said louder and slower.A useful phrase for him might have been “Is there another way of explaining that?” Same with meeting people he needed to meet them twice and of course job offers etc too.

Another couple of reasons for time alone

With both pressure centres undefined George was never really stressed when alone. It was others that could put him under stress. If he did not know this he could feel that it was his issues and then not feel so good about himself. If he physically could not take himself away he might emotionally remove himself or sit behind drugs or alcohol.

Secondly with an undefined spleen George would be sensitive to those around him as such he was an empath. He would also be very sensitive to the food he ate and what he drank. Often if the wrong things were consumed it would take a while to clear the system. He would need to get away from people just to re-balance himself and find out what was his and what was other people’s stuff.

George with the 53rd gate was a great starter of things. Getting really fired up with the excitement of something new. However once things were up and running and down to day to day routine he would lose interest. Making him a great starter and a lousy finisher, in fact he was not here to finish things.

George also had the gate of desire (30th gate in the solar plexus) and as it is red it was subconscious in him,. In other words he was perhaps totally unaware of this trait. The desires would get bigger and the effects last shorter and shorter periods of time. There is no way to get rid of this trait but to raise the frequency of the desire. So perhaps desiring to know about oneself, learn more about helping others etc would be a smart move.

Of course there is a lot that could be said about a man who was an icon in the music world. However to finish it is worth noting he has what we human designers call a 5th line wound. This would mean he could be under the spell of illusion and delusion. Things that happened in the past could have whole stories written around them. Enlarging and in some cases covering up the truth of what really happened. And with a 4th line trigger he would be very emotionally sensitive and keep his heart closed to those wanting closeness with him. This in the main as a method of self preservation and emotional protection.

If you found this interesting and would like to see how this might play out in your own personality then why not get in touch and request your own chart. Its free to get your chart.