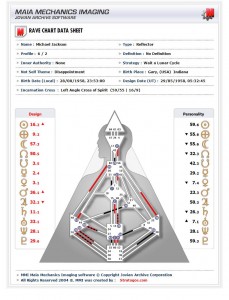 Michael Jackson was a really rare type, has was a reflector which make up just 1% of the population and are characterised by having no definition (no centres are coloured in). Reflectors are there like big mirrors that reflect anyone who comes into their aura back to themselves. In reflecting the images are enlarged around 4 times to ensure we do not miss this.

Michael Jackson was a gift to the world. As a reflector he had very little energy of his own. This may seem impossible when you consider how he was performed on stage but it was because he had the crowds so full of energy and excited. They poured their energy out towards him which he took, magnified and gave back to them. So as the performance went on the energy was rising higher and higher.

Reflections in his songs

Interestingly, he has two very poignant songs the first being ‘man in the mirror’, if only he could have seen that he was not the man in the mirror but purely the mirror reflecting all the others back to themselves. The second song was also very clear message to be interpreted which was his song ‘leave me alone’, which is a call from deep inside to honour the 2 in his 6/2 profile where he is a role model (6) and a hermit (2). So the role model is there to lead us out to walk his talk and the 2 must have time and space alone to be the hermit and to reconnect with life and the earth and have his alone time.

He was really a chameleon type changing and reflecting whoever he was with he could blend in to most situations but this could be confusing for him if he did not know this as it could feel like he was never sure who he was and this would keep changing of course. Time alone bringing him back to himself and a chance to rest. It would take a lot of pressure off him with this lack of other people directly around him.

One final point was he had a strategy of waiting a lunar cycle (just over 29 days) before making nay decision which must have been hard with all the pressures of the world on his shoulders in a business that rarely slept..

To get your own personal bodygraph chart click here

We use cookies on our website to give you the most relevant experience by remembering your preferences and repeat visits. By clicking “Accept All”, you consent to the use of ALL the cookies. However, you may visit "Cookie Settings" to provide a controlled consent. You can read our full privacy policy here: Read More
Cookie SettingsAccept All
Manage consent

This website uses cookies to improve your experience while you navigate through the website. Out of these, the cookies that are categorized as necessary are stored on your browser as they are essential for the working of basic functionalities of the website. We also use third-party cookies that help us analyze and understand how you use this website. These cookies will be stored in your browser only with your consent. You also have the option to opt-out of these cookies. But opting out of some of these cookies may affect your browsing experience.
Necessary Always Enabled
Necessary cookies are absolutely essential for the website to function properly. These cookies ensure basic functionalities and security features of the website, anonymously.
Functional
Functional cookies help to perform certain functionalities like sharing the content of the website on social media platforms, collect feedbacks, and other third-party features.
Performance
Performance cookies are used to understand and analyze the key performance indexes of the website which helps in delivering a better user experience for the visitors.
Analytics
Analytical cookies are used to understand how visitors interact with the website. These cookies help provide information on metrics the number of visitors, bounce rate, traffic source, etc.
Advertisement
Advertisement cookies are used to provide visitors with relevant ads and marketing campaigns. These cookies track visitors across websites and collect information to provide customized ads. There are no adverts on this website.
Others
Other uncategorized cookies are those that are being analyzed and have not been classified into a category as yet.
SAVE & ACCEPT