We bid farewell to David Bowie 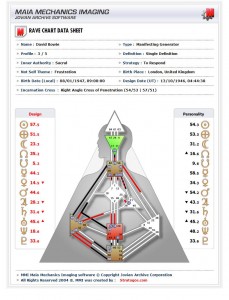 This week we bid farewell to David Bowie. I think along with many thousands of people around the world I felt a great sense of loss and a sudden sense of grief as I woke to learn that a childhood music idol David Bowie had sadly lost a battle with cancer and had passed away just a couple of days after his 69th birthday and a day or so after releasing his latest and what will now be his last album. There are most weeks announcements of deaths of famous people so why did David’s death cause me to feel this huge sense of loss and to shed some tears at the news, for a man I hardly knew and had never met. This led me to turn to my favourite tool, Human Design and see what this amazing artist had to offer the world.

It would be so easy to write a book or a long essay about it but I wanted to reflect on a few salient points that leapt out at me when I produced his chart and saw it for the first time.

David Bowie was a Manifesting Generator

Firstly I noted that he was a Manifesting Generator (MG) who like all Generators has a strategy of waiting to respond. MGs also do not like being told what to do at all so if this was to happen in  his life David was likely to do the exact opposite just because he could. This could bring about rebel tendencies and a distaste for being made to wait by bureaucracy and red tape. When truly in the flow David would love the freedom to shoot off and explore something new at a fast pace often and then come back and share with his followers what he had found before heading off again.

You will also see he is a 3/5 profile which means he is a martyr/heretic. These people can tend to be outspoken and have a habit of doing so again and again. They are not this way to make anyone’s life a misery but to get them to wake up and take notice and to questions things they may have taken for granted or never really thought about. It could however also appear in David’s life as a repeating pattern he did not want or something that kept him doing things way beyond when he really wanted to.

His single definition meant he got things quickly he could make decisions about people, events or anything else within one meeting or upon hearing things for the first time.

His incarnation cross the cross of penetration so clearly shows he had a mission here to convey messages to us and penetrate our defences and other ways we have of hiding from truths and emotions we may not want to see or feel and to also rise up the hierarchy himself too.  It is also about getting recognised by someone higher up than you and being lifted up and bought to a new higher level. And yet with the third line in the 54.3 David would in many ways not have liked the spotlight on him maybe deflecting it on other characters he played or his individual style of music and productions.

Having a  defined spleen (brown triangle on the left hand side) would indicate that David could easily early warning signs of illness and then be surprised when an illness or health news was broken to him. It does however make a great ‘nurse’ in that he would be happy to help and do things for people often at his own expense (3rd line Martyr). One aspect of all the gates in the spleen is that they are all fear gates and with the spleen defined these will all be active where he has the gate defined (blue circle round number and channel coloured in at that end. So for example where he has the 44th gate in his design this is the fear of the past or haunted by the past and on the other hand having the 57th gate this is the fear of the future. So in some ways he was trapped between these which at times could keep him pinned in the now but at others totally distracted by either the past or the future or on very busy days both!

He has an undefined emotional solar plexus (white triangle on the right) so he would be a victim to those with it defined (coloured in) and ride their emotional waves whether he liked it or not. The challenge of any undefined centre is that it acts like a mirror but not an ordinary one more like a shaving mirror by taking what ever emotion a person bought with them and magnifying it 4 times before reflecting it back. If we do not know this we can be a constant victim to  the emotions of others.

David also has the 53rd gate in the root centre (brown square at bottom) with this gate it is all about starting things and the excitement and energy that can abound around a new idea or project. We just need to realise that unless you have the 42nd gate (David does not) you are not here to finish things. So more of an entrepreneur and not an MD! This is also supported by the fact David has the 45th gate from the throat centre (brown square in throat) which works along with the 21 at the other end of the channel the 45 is the business owner and the 21 is the MD.

With the lower mind defined (green triangle in the head) and connected to the throat centre David makes a great advocate speaking up for those who cannot speak for themselves. This may however have caused some problems when younger when he may have been a bit too vocal for his teachers liking.

With an undefined G or self centre (white diamond in the centre of the chart) David would have no idea of what he wanted to do when he grew up but would have learnt that being a Generator he need to wait until he had something to respond to which may not have always been easy.

If you have found this interesting and would like your own chart done please request one here.